They are always on time, and they pay attention to our needs. They also use non-chemical pesticides, and I like that.

They call to remind me that a service needs to be performed.

I am still using them. They have great observation skills, and they give great recommendations.

All of the guys are so friendly and helpful. They also follow up.

They were very professional.

President Richard Estrada has more than 23 years of experience in the pest control industry. ATCO relies on the expertise and experience of its licensed and certified technicians, all of whom offer effective, long-term solutions for ridding homes and businesses of unwanted pests. “We adapt our procedures to meet the particular needs of each client and take their concerns into account before doing any work,” says Mr. Estrada.

An ATCO Pest Control technician applies a spray treatment to a client’s bushes.

President Richard Estrada has more than 23 years of experience in the pest control industry. ATCO relies on the expertise and experience of its licensed and certified technicians, all of whom offer effective, long-term solutions for ridding homes and businesses of unwanted pests. “We adapt our procedures to meet the particular needs of each client and take their concerns into account before doing any work,” says Mr. Estrada.

“We strive to provide long-term solutions for pest problems, not just quick fixes. We thoroughly assess each situation to develop the most sensible and efficient approach, and we discuss the recommended procedures and options upfront. Our company vision: Be Leaders Who Care About Team, Environment, Family and Customers.”

ATCO Pest Control eradicates, traps, removes and deters indoor and outdoor pests for residential and commercial clients in Marin, Sonoma, San Francisco and Contra Costa Counties. “We handle most insects, including ants, termites, cockroaches and pantry pests,” says President Richard Estrada. “We also do spiders, rats, mice, gophers and moles. Basically, we treat anything that infests the inside of a home. We’ll even remove fungus and pigeons.”

Because the company isn’t part of a larger corporation or franchise, it isn’t locked into strict procedures and methodologies or intent on getting customers to sign long-term contracts. “We can adapt our procedures to meet the individual needs of each customer,” says Mr. Estrada. “If a homeowner has a particular concern, we take that into account.”

ATCO Pest Control is EcoWise-certified and trained in preventative-based pest control methods. “When we look at a pest problem, we don’t just consider what chemicals should be applied, but also what can be done to permanently eradicate and prevent future infestations,” says Mr. Estrada. The company also specializes in less invasive and non-chemical methods of pest control, including vacuum and steam. When chemical pesticides are required, it prefers to use organic materials and products.

To keep your home pest-free, it’s important to take preventive measures. “Simply inspecting a house’s exterior on a regular basis will prevent a lot of infestation problems,” says Richard Estrada, president of ATCO Pest Control in Novato. “Walk around and identify any openings that rodents or insects could use to get inside, and make sure no trees or bushes touch the house or allow pests to access the roof.”

Often, simple fixes will avert most pest problems, and prevention is easier and less expensive than eradicating an infestation once it has occurred. Consider the following preventive tips:

• Use fences and implement traps, lights and noisemakers as the first line of defense in keeping pests out of your home.
• Permanently seal small entrance holes with caulking or steel wool to prevent rodents and insects from entering your home.
• Ensure doors and windows are tightly sealed and screened. This will also help with your energy bill.
• Store all dry goods (including pet food) in tightly sealed containers. Store fruit in hanging baskets.
• Make sure decks, porches and crawlspaces have good ventilation to prevent mildew and termites.
• Make sure your home is cleaned regularly. Discard food scraps in well-sealed garbage cans or dispose of them using composting methods. Keep clutter to a minimum.


If you’re ecologically conscious, choose a pest control company that uses environmentally-friendly products and methods. “Hire a firm that understands how to control and eradicate pests from a Green standpoint,” says Mr. Estrada. “Look for a company that uses a minimal amount of chemical pesticides and implements non-chemical pest control methods, like vacuum and steam.”

Q: Do you use Green pesticides?

A: Yes. We’re big believers in integrated pest management (IPM). We use a wide variety of techniques and materials and apply them to particular situations, from vacuum and steam to organic pesticides. Basically, we use any environmentally-safe products or methods that will get rid of pests and keep them from coming back.

A: In certain cases, yes. Orange oil is effective against dry-wood termites, but only if the problem isn’t severe. It doesn’t work on subterranean termites, which are common in the Bay Area. If orange oil is the right solution for your problem, we’ll recommend it. If not, we’ll recommend a different approach. Our inspectors aren’t paid on commission—they’re not trying to sell you anything when they inspect your house.

Q: Should I be worried about my pets after a treatment?

A: No. We use EcoExempt materials, which are food-grade products that are approved for use in kitchens or elsewhere where food is prepared. EcoExempt is perfectly safe for pets.

A: Yes. We’re proud to be certified in the latest advancements for treating and preventing Sudden Oak Death. We’re also adept at spraying dormant fruit trees and treating a variety of arboreal pests, including California oak moths, oak worms and tent caterpillars.

Richard Estrada: Getting the Bugs Out

NOVATO – When Richard Estrada first started working in the pest control industry, he was at a crossroads: burned out, overtired and looking for change. “I was delivering produce for a company based in San Francisco, which meant a lot of very early mornings,” he recalls. “I had just become a father a couple years earlier, and I found I wasn’t able to spend as much time with my son as I wanted because I was always trying to catch up on sleep.”

Richard knew he wanted to transition to a job with regular daytime hours, but he wasn’t sure where to start looking, so when he got an invitation from a friend to try his hand in a totally new industry, he didn’t hesitate to accept. “A good friend of mine owned a pest control company, and he invited me to work with him for a day to see if it was something I’d like to do,” he explains. “As it turned out, I found it very interesting and decided to keep working for him. Sixteen years later, I’m president of ATCO Pest Control.”

Born in East Los Angeles and raised in Iowa, Richard moved to the Bay Area in 1989, where he still lives with his wife, Stella, and their two sons, Nathan and Marcus. After nearly 25 years, he says he still appreciates the natural beauty of the indigenous landscape. “We have the bay, the mountains and so much more. I couldn’t imagine living anywhere else at this point.” Richard and his family like to take advantage of all the area has to offer, engaging in a variety of outdoor activities such as biking, hiking and skiing. One pastime that Richard especially enjoys is golfing with his sons. “My boys and I go golfing quite often. It’s a great way for us to enjoy the beauty of creation and spend some time together.”

In his professional career, Richard says a crucial ingredient for success has been his personal associations. “When I went into business for myself, I knew it would be important to surround myself with people who were smarter than me when it came to business matters. Today, whether it’s industry colleagues or company employees, I continue to partner with people whom I can collaborate with and learn from.”

When asked the first thing he’d do if he could retire tomorrow, Richard says it wouldn’t be a likely scenario. “Quite honestly, I can’t see myself retiring. I enjoy what I do and love working alongside my team members. I might travel and play golf a little more often, but I could never see myself fully retired.”

Q: What were you most known for in high school?
A: My smile.

Q: Which super power would you choose, flight or invisibility?
A: Invisibility.

Q: If you were an insect, what would you be?
A: I think I would be an ant—they’re hard workers and they don’t need to be told what to do.

Q: Do you have any memorable job stories?
A: One time, I got a call about an ant problem at a client’s house. As we were in the kitchen looking at the infestation, the client brought my attention to an ant farm that was sitting on the countertop. We both had to laugh at the irony.

Q: What’s one movie that people would be surprised you’ve never seen?
A: “Arachnophobia.” 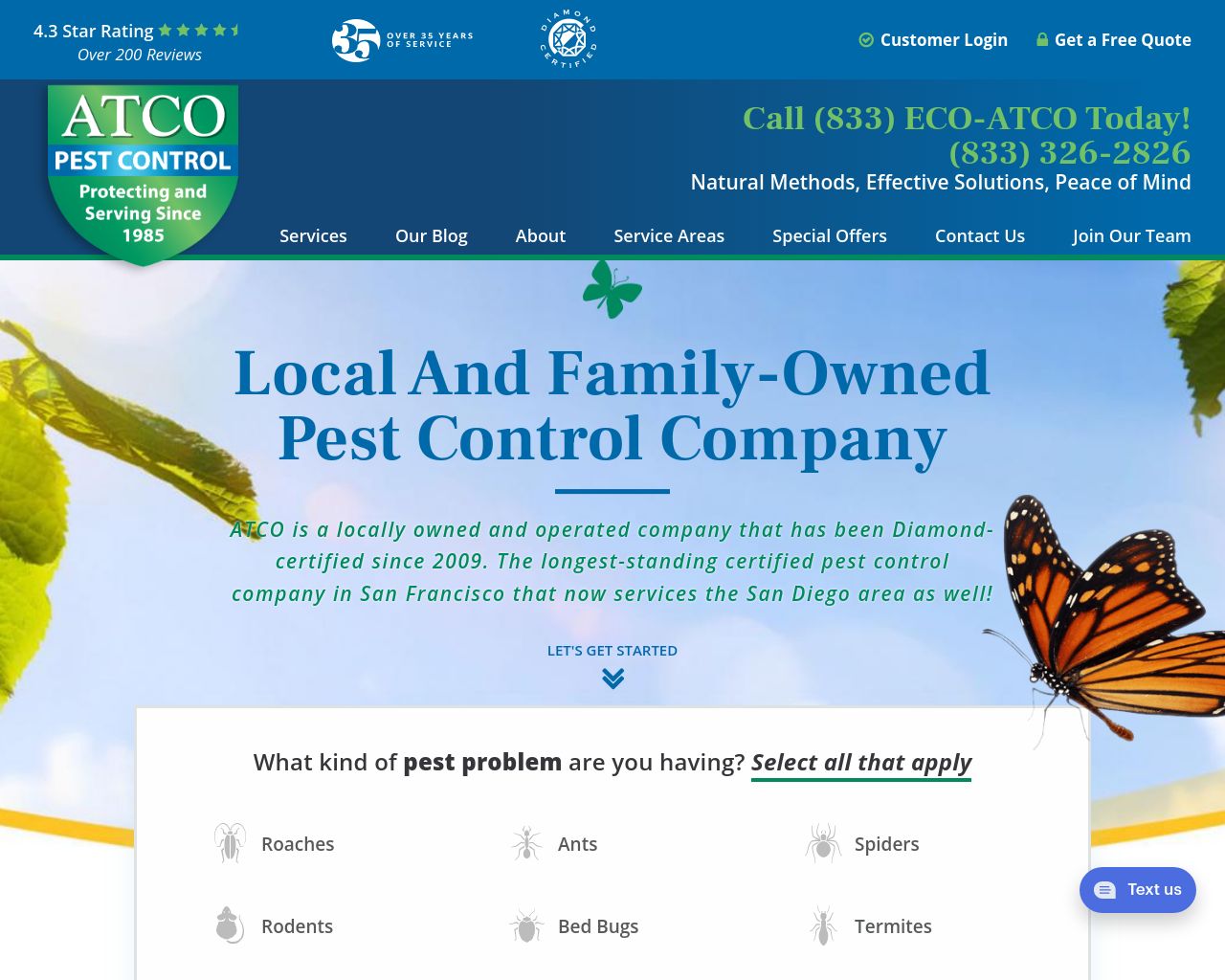 Each surveyed customer was asked, “If you needed any helpful expertise, did this company provide that expertise?” To calculate this score, total “Yes” responses were divided by total responses (excluding those that stated they hadn’t needed any expertise).

They are always on time, and they pay attention to our needs. They also use non-chemical pesticides, and I like that.

They call to remind me that a service needs to be performed.

I am still using them. They have great observation skills, and they give great recommendations.

All of the guys are so friendly and helpful. They also follow up.

They were very professional.

Reliable, dependable, and their services worked on getting rid of my pests.

They are always timely, and they ask for any feedback.

He was able to get rid of my bed bugs on multiple occasions. It was really critical that they solved the problem in that apartment.

They were prompt, and they did the job as requested. They were always very courteous.

They identified the problem and solved it.

They were on time, and I thought they did a good job.

I am very positive about them.

The fellow came on time, and he did it efficiently. He kept me informed and did a fine job.

To definitely use them.

They are very knowledgeable, accommodating and very thorough.

I referred them to a couple of people.

I would suggest that they call them for an opinion. They seem to be professional and on time.

They are very reliable and effective. The products that they use really gets the job done.

I have had some unusual problems with pests, and they handled all of them expertly. They were very professional and proactive.

They are very good at reminding us to schedule a spraying.

They are very accommodating.

They're thorough and very accommodating to my schedule. When I've had an emergency, they have made it a point to get someone out the same day. They've been doing my external spraying for 15 years, and they do it routinely. They maintain the rodent control by doing assessments and sealing things up. They are great and have been really responsive.

The best thing is that when I need them, they get here quickly.

They are very effective, very reliable, professional, and they are nice. I have been using them for years.

They do their job, and they are a good company. The staff and the people who come out are nice.

I would certainly recommend them.

Their customer service, they are very good about taking care of whatever I need at my house.

They are a great company.

I like their communication and the way they schedule appointments.

They are very knowledgeable, professional, and thorough.

I would say the professionalism.