I would say to use them if you want to give your business to a local, professional, customer-oriented, and honest company.

They were timely, responsive, and they did the job as described. Michael, the owner, is personable and knowledgeable. He's way beyond a '10'.

They were efficient in putting their work together.

The service people were friendly.

They did excellent work, they were reliable, and I felt their price was a good value.

The quality of the work

Owner Michael Chasov has many years of experience in the electrical contracting industry. He and his staff members immigrated to the United States from Russia, and most of them hold electrical engineering degrees. “Our extensive industry knowledge not only allows us to perform a variety of electrical tasks, but also to act as a guide for our clients, provide them with options and help them make the right choices for their properties,” says Mr. Chasov.

Owner Michael Chasov has many years of experience in the electrical contracting industry. He and his staff members immigrated to the United States from Russia, and most of them hold electrical engineering degrees. “Our extensive industry knowledge not only allows us to perform a variety of electrical tasks, but also to act as a guide for our clients, provide them with options and help them make the right choices for their properties,” says Mr. Chasov.

“Our primary focus is keeping our clients happy from the beginning of their projects to the end. We show up on time, give constant progress updates and honor our estimates. We want to gain customers for life, so if there's anything they're unhappy with, we'll make it right.”

Electrical contractors are always looking for ways to differentiate themselves from their competition, and those that have earned the prestigious Diamond Certified award are already several steps ahead. In addition to its “Highest in Quality” status, Chasov Electrical, Voice & Data sets itself apart by offering its clients a unique package of services that most companies aren’t qualified to provide. “When customers hire us, they don’t have to hire separate network people or contractors to install things like sound systems,” explains owner Michael Chasov. “We provide everything in one package, including a full spectrum of low-voltage wiring services.”

Unlike electrical contractors that strive to complete jobs as quickly as possible and sacrifice quality control in the process, Chasov Electrical, Voice & Data takes the time to educate each client by walking them through the entire project and showing them what’s involved. “We want to give our customers a complete picture of what’s going on so they understand all their options,” says Mr. Chasov. “For example, we tell them when they can reuse knobs and wiring instead of automatically charging them for replacements.”

Another unique feature of Chasov Electrical, Voice & Data is its ability to perform high-end residential work that most electrical contractors can’t handle. “We’re highly trained and proficient with new technologies, including some just-developed wiring control systems,” explains Mr. Chasov. “We constantly work with new systems, so we’re able to help our customers make better decisions about what to put in their homes.”

Reduce your energy bill and help the environment with LED lighting. As environmental awareness and responsibility have increased in recent years, so too has the desire to reduce energy consumption in new ways. A leading fixture in this movement is LED (light emitting diode) lighting, which is an alternative to traditional lighting that provides long-term economical savings and environmental benefits. To determine if LED lighting is right for you, consider the following information:

Energy-efficient. Most LED bulbs use 1/3 to 1/30 the energy used by traditional bulbs, which means most homeowners recoup the initial costs and save more over the life of the bulbs. It’s estimated that the average home saves $14,000 in energy costs by switching 25 incandescent lights with 25 LED lights (based on more than 50,000 hours of use).

Less heat. More than 90 percent of the energy burned by incandescent bulbs is wasted on unwanted heat. In comparison, LED bulbs burn cool and only use 10 percent of their energy as heat.

Long-lasting. Most LED lights are rated for 50,000 hours of use, so even if they were left on 24 hours a day, they would still last an average of 10 years. In normal usage situations, most LED bulbs last 17 years or more. “They’re so efficient that they can literally work for 25 to 30 years without needing to be replaced,” adds Michael Chasov, owner of Chasov Electrical, Voice & Data in San Francisco.

Environmentally-friendly. LED light bulbs don’t contain mercury or lead like traditional bulbs, and they don’t use mercury in the manufacturing process, which makes them safer for home use and better for the environment. Instead of treating them as hazardous waste, you can dispose of them easily.

No radiation or UV light. Compact fluorescent bulbs have been criticized because they release radiation, which some say can be harmful to humans when used in close proximity. Also, lights that emit UV rays can fade and damage furniture and materials over time. Because LED lighting doesn’t produce ultraviolet light, this isn’t a concern.

No filaments. Filaments in incandescent bulbs can be easily damaged by bumping and jarring. LED lights don’t have filaments, so they’re generally sturdier.

Durable. Most light bulbs are made of breakable glass and metal, which can be hazardous during temperature fluctuations and when they’re dropped or hit. LED lights are made of shatterproof plastics and durable aluminum, which makes them much less likely to break when introduced to extreme temperatures or dropped/struck.

Q: How expensive is electrical work?

A: It can be expensive, but it’s definitely beneficial to invest in a good electrical system. We’ll lay out the pros and cons of upgrading your electrical system in terms of safety, feasibility and cost. An electrical remodel can add as much value to your home as a kitchen remodel—you just have to make sure you’re spending money on the right items.

Q: Will you help me choose the right lighting for my home?

A: We can guide you through this process or refer you to a professional lighting designer. We’ll start by asking what kind of lighting you’re looking for—many customers are surprised that so many lights exist! Then we’ll help you make a decision based on your answers.

A: Very few appliances require three-prong outlets, so you only need to upgrade the ones that require grounding, such as computers and anything with a motor. In most cases, we need to rewire the outlet in order to ground it, so we usually advise only doing the minimum number of outlets required.

Q: Do I need electrical plans for my project?

A: Electrical plans are only required for large installations. You can consult a district electrical inspector or supervisor to determine if your project is large enough to require plans.

Q: What exactly does a service call entail?

A: A service call is when a qualified specialist comes to your house to perform a small electrical job. Some examples are restoring lost power, installing a light fixture, running telephone line and repairing a doorbell.

Q: Do you need advance notice to perform an electrical inspection?

A: Yes, we ask our clients to provide sufficient advance notice for critical inspections. Our goal is to provide inspection services within 48 hours, but that isn’t always possible. 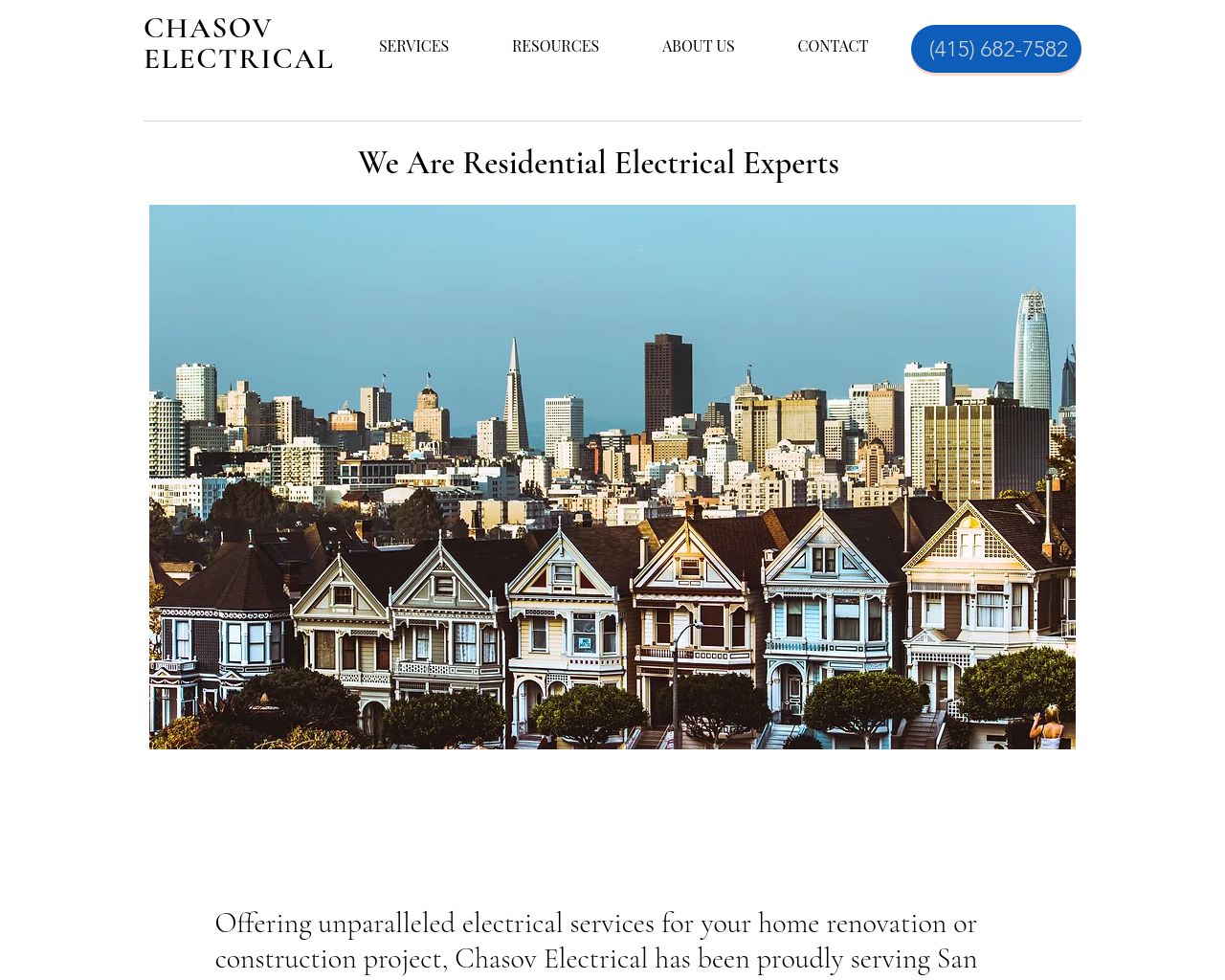 Each surveyed customer was asked, “If you needed any helpful expertise, did this company provide that expertise?” To calculate this score, total “Yes” responses were divided by total responses (excluding those that stated they hadn’t needed any expertise).

Chasov Electrical, Voice & Data : Average 9.2 out of 10 based on 285 unique customer surveys of customer satisfaction.

I would say to use them if you want to give your business to a local, professional, customer-oriented, and honest company.

They were timely, responsive, and they did the job as described. Michael, the owner, is personable and knowledgeable. He's way beyond a '10'.

They were efficient in putting their work together.

The service people were friendly.

They did excellent work, they were reliable, and I felt their price was a good value.

The quality of the work

Dimitry is very knowledgeable. I recommend them all the time.

They are super knowledgeable. Dimitry follows through with what he says.

I would recommend them. They do the job.

They were pretty responsive. They came out for an emergency and they dealt with it, and I am happy about that. They dealt with the city and the code enforcement people, so I didn't have to do any of that.

They are one of our go-to vendors for electrical work.

They are knowledgeable and efficient.

They are very competent and capable.

They were responsive and they did a very good job.

They know their stuff.

Both times that I called them, they came out within 24 hours, were reasonably priced, and they were quick.

They are nice, they know what they are doing, and they are fast.

I wouldn't hesitate to use them again.

They are very reliable and they respond to phone calls. They do a variety of electrical things.

They are nice and reliable. They can do the job.

They are very friendly and they provide all kinds of information if you ask questions. The electrician who worked for me was good about answering questions.

Their responsiveness, the actual work, and making me feel like the work that they did was correct

They are good to use.

They showed up on time. He fixed the problem.

They were excellent people to use and they were very reasonable.

They were extremely responsive.

If you have a complicated issue, they would be the people to call.

The best for me was their technical expertise.

They were thorough and they did a good job.

They came out as soon as I called them.

It's hard to find a good electrician. I would definitely recommend them.

Really, really responsive even though we had a difficult job for them. They came back as many times as we needed to get it working right.

They do excellent work.

I would suggest lining up several things together at once, but I think they are very quick and very efficient.

I think they did a thorough job and the repair still works.

I would recommend them to my friends and I would tell them that they do good work and the permits pass.

The person he sent, Demitri, was wonderful, polite, and he cleaned up after himself. He did work that passed inspection at a reasonable price.